Dead Beat is the 18th episode of Season 2 and the 31st episode of the series overall. It is the first part of the two-hour season finale of Season 2. It aired April 12, 2016 and had 1.36 million viewers.

Liv and Ravi are in need of help and find an unlikely ally in Blaine. Detective Babineaux and Dale Bozzio pursue a new lead on an old case. Meanwhile, when Major finds himself in a world of trouble, sleazebag Brant Stone comes to his rescue. Vaughn's evil side reaches a whole new level of mean.[1]

Major is arrested after the tip-off to being the Chaos Killer. Liv tries to help out Major by supplying him with brains before he turns within 48 hours and becomes a Romero zombie. Agent Bozzio and Clive attempt to link Major with other crimes after another witness comes forward to reveal that he sold Major weapons used in the Meat Cute deli massacre months earlier. During the interrogation, Major found out that Drake was dating Liv. Vaughn sent sleazy lawyer Brant Stone to Major and the lawyer keeps insisting that without any bodies, they cannot do anything to convict Major.

When Liv visits Major, Major tells her that he is not the Chaos killer and sends her to talk to Ravi.

Ravi is finally forced to tell Liv the truth about Vaughn blackmailing Major into being his zombie-killer. He revealed that everyone he supposedly killed was alive but frozen. They come out with a plan to release the frozen zombies so that when they come out alive and walking for the public's eyes, the police will have no choice but to drop the case on Major.

Since Major did not tell anyone where the frozen zombies were, Ravi visits Major and tried to get him to tell the location by asking about how to get to a frozen zombie game level. But when they head to the warehouse where Major is keeping his sedated victims, they are gone. Ravi and Liv can only hazard a guess that the zombies were taken away by Vaughn's henchmen.

Vaughn is on a video conference with a private military contractor who is interested in buying the Max Rager company. However, the woman specifies that in order for the sale to go through they have to have assurances that the so called 'Chaos Killer' had nothing to do with the company. As soon as they end the conference call, Vaughn tells Janko that it's time to finish this for good and orders Janko to kill Major and Liv as soon as Major is released from jail.

Meanwhile, Liv goes to Blain to get some brains as they are locked out of the morgue while the investigation of whether or not Ravi was an accomplice for Major. Blaine continues struggling with his memory loss despite skeptic views about whether his lost memories are real or fabricated. He starts to give Liv some brains but Chief and Don E interrupt and tell her that she can have some if she signs up for the 25k a month plan. She argues that if Major doesn't get some brains soon it will turn into a zombie apocalypse but Don E doesn't care and sends her away. Blain, feeling guilty, hides some in a casket to give to her.

However, as soon as Major is released on bail he is arrested again, this time by Clive, for the massacre at Meat Cute. The man who sold Major the weapons he used contacted Clive. He's in jail and wants a deal for his testimony as to what weapons he sold Major.

When a nutritional bar that Liv concocted with the brains fails to reach Major due to the lawyer's dog eating it, Liv is finally forced to tell Babineaux the truth about who she is, and about Major's position to plead with him to get him released before he turns and Seattle turns into a start of a zombie apocalypse. Using a legal loophole, Babineaux has Major released on a technicality, which puts him at odds with Bozzio, who ends their professional and personal partnership.

Vaughn's henchman Janko tries to kidnap Liv while she was on the phone with Ravi. When Ravi returns, he sees Janko and believed that he was collecting a body. But when Ravi sees that Liv is missing and broken glasses on the floor, he realizes something is wrong and knocks out Janko before he can close the door to his van. Ravi injects Liv with an EpiPen and she wakes up. However, Janko has come up behind Ravi, and Liv reacts in time to block the tranquilizer gun, aimed at Ravi, with her hand, once again knocking her out. Ravi succeeds in fighting off Janko and doses him with his own tranquilizer gun. Liv wakes up on the office couch to find Ravi is in shock as the tranquilizer gun was set to overdose and it killed the guy. Liv tells him it was self-defense to try to calm him down. Liv then eats the henchman's brain.

Back home, with Liv, Peyton, Ravi and Major, Liv has a vision of the frozen zombies, including Drake... walking around the glass containment chamber in the Max Rager basement lab.

TICKETS TO THE GUN SHOW 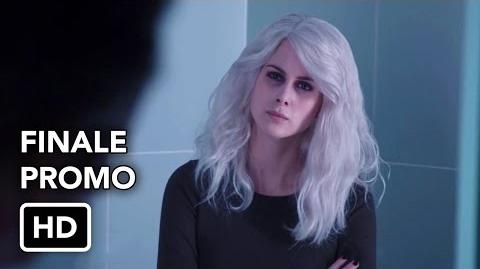