A group of drunken teenagers take a late night joyride with disasters consequences. As they cover up the accident, the man mysteriously comes back to life and attacks one of the girls. After Liv consumes the girl's brain, she is taken back to high school as she and Clive investigate the case. A surprise death of one of the victim's friends raises some serious questions about the case. Major believes Blaine's deli is not all it seems to be. Rahul Kohli also stars.[1]

The episode opens as the now zombified hitman Sebastian Meyer gets hit by a car full of teens. They were stoned and in a stolen car, so they bury the seemingly dead body. Sebastian snaps Kimber’s neck and eats her brain, sending the three remaining teens running in fear. Two weeks later, a man jogging in the woods discovers her dismembered foot. At the crime scene, Liv states that Kimber went to school with Liv’s brother Evan. Realizing that Kimber was killed by a zombie, Liv starts to freak out about the rampant zombies. Worrying about what Major is about to do, she vows to kill Blaine before anyone else gets hurt.

At the morgue, Liv takes liquified shots of Kimber’s brain. Unfortunately, Hope, the ex-zombie rat, is dead. As the cheerleader peppiness sets in, Liv helps Clive question Kimber’s best friend Tate. Tate plays a voicemail Kimber left on the night of her death, leading Clive down the path of finding both the bar and the man Kimber was seeing. The three other teens from the night of Kimber’s death make up The Ass Hats. When the teens give a generic response to where they were the night of the death, Liv brain flashes to the moment right before the teens hit Sebastian. At their house, Peyton and Liv have a peppy conversation akin to their old relationship.

Reviewing security footage, Clive discovers the stolen car. Going back to the band practice garage, the investigation team discover Kimber’s boyfriend Nate slaughtered. Blaine tells his lackey to find the missing brains, while Major vlogs his discoveries about zombies. Posing as a health inspector, Major spies in on the meat shop. Talking over Nate’s body, Ravi decides that it’s time for Liv to eat this teen’s brain. As Ravi rejoices over the creation of a new zombie rat, Clive unknowingly eats brain pizza. Clive found threatening messages from (presumably) Sebastian on Nate’s phone.

Ravi and Major have a fun conversation about a date Ravi’s bringing Peyton on. Julien realizes that Major was the “health inspector” after the inspector is described as having “good hair.” Major then buys some guns and a grenade from the back of some guy’s trunk.  Liv turns stoner when Nate’s brain activates, as she brain flashes to Cameron threatening Nate about the former going to the police. Teresa comes by to say that she thinks she’s next. Cameron texts Teresa and tells her not to trust the police. At the morgue, a 91-year-old woman’s body is brought in, sans brains, rising suspicions of a serial killer. Liv decides to drink some more cheerleader to get it back together. Clive texts Liv Teresa’s police sketch, revealing Sebastian as the killer.

Peyton is attacked by Sebastian, but is still stirring. A fight ensues between him and Liv of epic proportions. Liv stabs him through the head as Peyton wakes up. Liv’s tells Peyton that she is a zombie and Peyton decides to run away. Teresa discovers a bloody hotel room as the door slams behind her. Struggling to dial 9-1-1, a bloodied Teresa doesn’t answer the responder. Major’s the guy who knew too much, as Julien has our pretty boy strung up. Evan drops by to give his application, and Blaine “hires” him on the spot once he realizes Evan’s connection to Liv.

WHY DID THE ZOMBIE CROSS THE ROAD?

REMAINS OF THE DAY

BUT I’M A CHEERLEADER

BAND ON THE RUN

THE DAY THE “MUSIC” DIED

STONER? I HARDLY KNEW HER

GUESS WHO'S COMING FOR DINNER 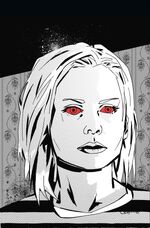 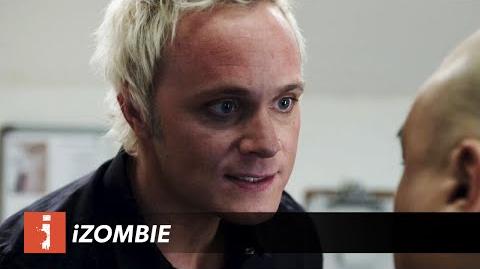 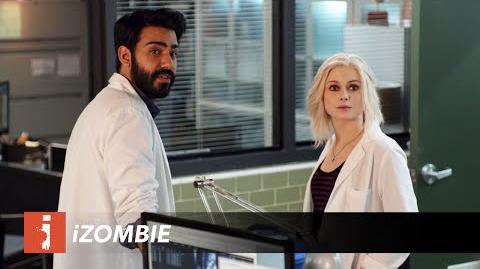 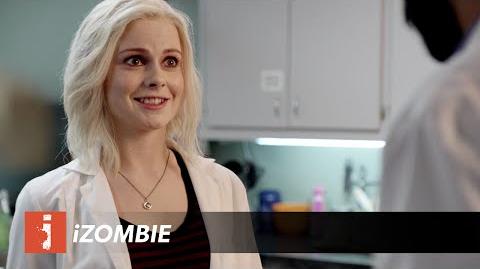