Dirt Nap Time is the seventh episode of Season 3 and the 39th episode of the series overall. The episode premiered on May 16th, 2017 and had 0.86 million viewers.

When Liv and Clive work together to solve the murder of a very charming, but womanizing, preschool teacher, things get interesting when they bring his jealous girlfriend Piper in for questioning. Meanwhile, Peyton is assigned a very interesting case. Lastly, Blaine finds himself in a bad situation. Rahul Kohli also stars.[1]

Liv prepares a PB&J (peanut butter and jelly) sandwich. She puts 5 pieces of Jamie Brennan's brain on the peanut butter side and closes the sandwich. She cuts off the crusts, flattens the sandwich, rolls the sandwich up, then cuts the roll into 5 pieces into 'pinwheels'. She places the pinwheels onto a plate, puts a touch of jelly in the middle of the plate, separating the pieces in a ratio of 2 : 3 to make it look like a 'happy face'. 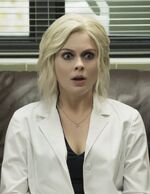