Donald Eberhard, more commonly known as Don E. or sometimes just Don, is a zombie who worked for Blaine DeBeers and later took over his Utopium business once he became an amnesiac.

He owns and runs the Scratching Post, a zombie bar/hostess club; Blaine takes care of their other businesses. Don is proud of the bar as he built it up himself. 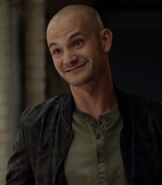