Eat a Knievel is the eighth episode of Season 3 and the 40th episode of the series overall. The episode aired on May 23rd, 2017 and had 0.98 million viewers.

Liv shares the brain of a former daredevil with her new boyfriend, and the experience brings them closer. Blaine is back to his old ways. Meanwhile, Ravi makes progress in his new research. Finally, a discovery is made that could put Major in grave danger. Aly Michalka and Malcolm Goodwin also star.[1] 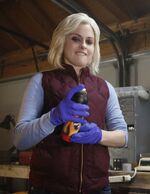