When Clive identifies a John Doe in the morgue as one of his former criminal contacts from his days on the vice squad, Liv is surprised that Clive is so quick to refuse her help in solving the murder. Liv and Ravi investigate on their own which puts them in a precarious situation. Liv’s problems continue to mount when Major begins searching for a roommate and she believes he’s considering a cute co-ed.[1]

The episode opens with Blaine and the woman he turned in bed together; she is still buying brains from him. They get spray tans together.

Liv goes to Major’s house to apologize for coming on to him and for acting weird lately. While they are talking, Major's current roommate, whom isn't working out, is in the process of moving out. Liv inquires about Eddie, the missing kid from Helton. Major tells her that he hasn't turned up and now no one has seen Jerome as well. Major says that Jerome is responding to his text messages but he doesn't think he is coming back. While at his apartment, Liv runs into Major's new girlfriend, Corinne.

At the morgue, Ravi is working on a body as Liv tells him what occurred earlier. The body has had its molars and fingertips removed in order to make identification more difficult. Ravi believes that the victim was likely kicked to death. Liv’s brother shows up at the morgue; he’s going to be staying with her for a bit and came by to pick up a spare key. When he leaves, Liv takes her lunch and eats the brains with hot sauce over rice. Enter Clive, who recognizes the corpse, as Sammy Wong, a member of the Blue Cobra gang. He immediately tells Liv that he will not be needing her psychic abilities and to stay away from this case. Liv has her first vision: Clive, from back in his Vice days, beating up Ray for snitching, and she also sees him threatening to beat up Sammy too when Sammy tries to defend Ray. She tells Ravi, shocked, but he tells her to trust Clive, and seems more interested in the fact that Clive used to have a mustache. Liv begins showing sings of personality absorption in the form of paranoia. In an effort to thwart Corinne from moving in with Major, Liv suggest to Ravi that he should move in with him. Ravi doesn't want to lock himself into a lease and is content with his current living situation.

Meanwhile, Blaine meets another zombie and we see the heart of the ‘brains’ operation at a meat shop called Meat Cute. Blaine has turned a chef who makes brain meals. He orders his two henchman to make deliveries.

Liv goes to check out vice. She asks Clive's former partner about Sammy Wong. She also speaks ill of Clive and tells her he was suspended from vice. This piques Liv’s curiosity so she tells Ravi about it.

They find themselves at Hong Kong Video, due to the fact that Ray was wearing a shirt with the logo on it in her vision. Liv decides to go inside and snoop around meanwhile dragging Ravi along. They go inside and ask the man at the counter if Ray works there. Liv fails miserably at being undercover but Ravi comes to the rescue, sounding a bit more convincing. The worker tells them to wait right there while he disappears to the back. Ravi heads to the adult video section during which Liv has another vision. She sees someone else being beaten for supposedly being the snitch and AJ (the main Cobra) jokingly telling Clive "How could you think it was Ray." Realizing they are in the Blue Cobra's headquarters, she tells Ravi they have to leave. On their way out, they run into AJ and company, who are very suspicious as they leave. Afterwards, they see Clive show up at the shop and Liv believes Clive is still helping the gang.

Cut to Liv and her brother Evan at their apartment. Liv is extremely paranoid.

Both of Blaine's henchman are sitting in a truck late at night. One of them complains that when they finish with all the deliveries the gym is going to be closed, both of them happen to be gym rats. He continues to complain how all Blaine has to do is scratch rich people to acquire more customers while they are nothing but glorified "pizza delivery boys." They discuss going into business for themselves, knowing that Blaine would be very upset about that.

Back at Liv’s apartment, Clive confronts her and reveals Sammy was in Federal Witness Protection and had only come back to visit his dying mother.

Meanwhile, Major shows up at the morgue. He and Ravi have a moment filled with awkward conversation because Liv had suggested to Major that Ravi was looking for a room to rent even though he really wasn't.

Blaine's henchman are making a delivery to Jackie, and let her know that they are going to be offering the same service at a much more reasonable rate. Jackie sounds intrigued and let's them know what she will need time to think about it.

Back at the morgue Major and Ravi are bonding while talking about Diablo 3. They decide that they are going to move in together. When Major leaves, Liv begins to tell Ravi about Clive showing up at her house. They’re suspicious about Clive’s story about Sammy being in witness protection. Ravi has found out that AJ's father used to be head of the Blue Cobras but was put away on conspiracy charges 5 months previous, just after the FBI moved Sammy to Albuquerque as part of witness protection. This means her previous vision must have happened before Sammy entered witness protection. Liv is still suspicious of Clive and want to see where he's going.

Liv goes outside the police station to attach a tracking device to Clive’s car; however a member of the Cobras from the video store sees her. While running away, Liv has a vision from just before Sammy's death, in which he tells AJ and the others that Ray is a cop. Liv discovers that Sammy's last vision has given her a knowledge of kung fu.

As Clive is about to drive away Liv stops him and tells him that he saw the moment Sammy was killed and that Sammy told AJ that Ray is a cop. Clive calls the police for backup to go and save Ray who is on his way back from Hong Kong with a shipment of Utopiam (still working undercover as a Cobra). He tells Liv to go home.

At the meat shop Blaine is trying out new recipes, and as he is aware his minions are planning on scamming him, so he kills them. He pulls two more henchmen out of the freezer. One of them is Julian.

Back to Liv at home she calls Clive, they caught AJ’s crew at the airport, but AJ wasn't there. Clive tells her that he is headed to the videos store to arrest AJ. When she hangs up she hears someone in her apartment. It's AJ. He thinks that she is a cop working with Ray. He punches her in the face and attacks her. Liv proceeds to kick his ass with kung fu.

AJ picks up a piece of glass as her brother comes home. As AJ heads to the door Liv goes “full on” zombie and beats up AJ. While beating him up, Liv's brother walks in and she is able to pull back at the last second.

Liv apologizes to Clive who is obviously hurt that she considered him a dirty cop. In a serious moment Clive explains going undercover–he was never really suspended, he was so deep undercover no one would work with him afterwards. Liv and Clive make up.

Ravi moves into Major’s as Liv and him give friendship a try. Ravi explains to Liv that Major took Liv’s insistence that he move in (blocking Corinne from moving in) as a signal that she isn't ready to let him go.

At the meat shop, Blaine calls Jackie and tells her, "Thank you" for letting him know what his henchmen were up to. On the table is Jerome's body. Julian, who is now defrosted, asks to take Jerome's shoes because he likes them and are his size. Jerome's phone gets a text message from Major asking him where he is. Blaine responds saying, "It's all good," and breaks the phone. They start the saw and proceed to cut up Jerome.

IT'S A SHAME ABOUT RAY

HOW TO CHARM A COBRA

IN CLIVE WE TRUST 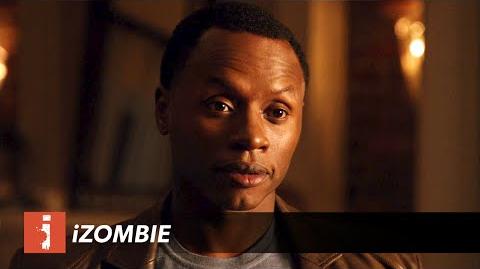 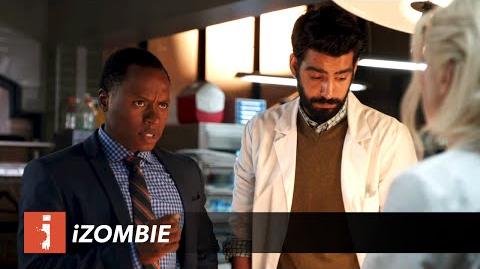 IZombie - Inside Liv and Let Clive