Veronica Mars creator and showrunner Rob Thomas was then announced to be an executive producer for the series. The series is a supernatural crime procedural that centers on a med student-turned-zombie named Liv who takes a job in the coroner’s office to gain access to the brains she must reluctantly eat to maintain her humanity. With each brain she consumes, she inherits the corpse’s memories.

The first episode aired on March 17, 2015, and was a success worldwide.

Olivia "Liv" Moore was a rosy-cheeked, disciplined, over-achieving medical resident who had her life path completely mapped out...until the night she attended a party that unexpectedly turned into a zombie feeding frenzy. As one of the newly undead, Liv is doing her best to blend in and look as human as possible. Her appearance now passes for "Goth," with shockingly pale skin and nearly white hair, and her demeanor has gone from exuberant to exhausted. The change in Liv is baffling to her mother, her former fiancé, Major, and her best friend and roommate, Peyton, who still has the high-energy, Type-A personality that Liv has completely abandoned.

Despite her post-traumatic ennui, Liv has devised a way to resist her baser urges to devour fresh human brains – she's taken a job in the Seattle coroner's office. In this appropriately dead-end job, Liv can secretly snack on the brains of the many Jane and John Doe corpses that make a final stop in the morgue. Despite carefully covering her tracks, Liv's boss, Dr. Ravi Chakrabarti, discovers her secret and is surprisingly excited about the scientific possibilities. Even with her boss' enthusiasm, Liv remains resigned to an eternity without hope or purpose, until she realizes that with every brain she consumes, she retains a portion of that person's memories. Liv begins to experience visions from the point of view of the murder victims.

Much to the surprise of Dr. Ravi and homicide detective Clive Babineaux, Liv often has detailed knowledge of crime scenes and motives that she can't easily explain. Posing as a psychic, she works with Detective Babineaux to investigate these crimes and discover who is responsible. It's not the same as being alive again, but at least Liv can find purpose in her undead existence by helping Clive solve the murders of those who are indeed fully dead.

Presence in more than four episodes

The first season received positive reviews.[2] Review aggregation website Rotten Tomatoes gave the series a 92% approval rating, with an average rating of 7.7/10 based on 49 reviews. The site's critical consensus states: "An amusing variation on the zombie trend, iZombie is refreshingly different, if perhaps too youth-oriented to resonate with adult audiences."[3] Metacritic, which uses a weighted average, assigned a score of 74 out of 100 based on reviews from 30 critics, indicating "generally favorable reviews". [4].

Amy Ratcliffe of IGN rated the pilot episode 8.4/10, praising the show's "casual take on zombies" and Rose McIver's performance as Liv.[5] LaToya Ferguson of The Onion's The A.V. Club graded the series a A- and stated the show is better for diverging from its comic book origins. She praised the show for having same quick-witted banter as Veronica Mars and observed it measures up well against Pushing Daisies, noting: "Television can only be better for having the voices of Thomas and Ruggiero-Wright back on a weekly basis".[6] Inkoo Kang of the Dallas Observer called the show, "dazzlingly, tirelessly witty" with an "acute attention to human relationships", and praised it as "the summer's most underrated series".[7]

After dying and discovering that she was a zombie after the events of a boat party, Liv spends five months stressing over what happened to her. After breaking up with Major, she starts to eat brains of murder victims in order to see how they died. Ravi notices this instantly and is amazed. He promises her that he will try to find a cure. Blaine shows up at the lab and Liv recognises him as the zombie that got her. After some cases where she comes to trust Clive and Ravi, she meets Lowell, another zombie. They start going out, but their chemistry is difficult at times, particularly when she "is a pregnant mother" and he "is gay". Upon discovering that Blaine killed Major's friend Jerome, by eating a brain at Lowell's apartment, Liv decides that she wants to kill Blaine. She finds herself unable to, but Lowell won't let it end that way and he stabs Blaine who then shoots Lowell in the head.

Under the impression that Liv is a psychic, he lets her help him solve various crimes. When he has to do a case alone though, she gets suspicious and thinks he is a criminal when he was actually working undercover. Major approaches him with the news of his friends dissappearing on the streets. Clive looks into this but is told not to when his boss finds out. He tries to help in secret, however the newspaper finds out.

When Ravi discovers that Liv is a zombie he is very shocked and amazed. He promises to help find the cure. Alongside Liv he finds another zombie, who attacks them, but Liv kills her. Ravi tests various combinations of Max Rager and Utopium on rats in his lab and one of them escape and eats the brains of the other rats. Ravi puts it in a special cage but it manages to bite him through steel gloves. He also develops a crush on Liv's friend Peyton. Despite wishing to live by himself he lives with Major.

Blaine takes Jerome and Eddie from the streets, pretending to be really punk. He then sells their brains to zombie customers, including Lowell. Liv discovers that he killed Jerome, so she plans to assassinate him. However she holds back. Lowell decides to stab Blaine, which ends up getting Lowell killed by the antagonistic zombie.

Originally engaged to Liv, she breaks up with him. He starts seeing other girls. When his friend Eddie goes missing he reports it to the police with Jerome. Jerome tries to look for Eddie at the skate park, however, Jerome goes missing too. Major goes to the skate park and is beaten up by the candy man. Later Major tracks down the candy man's car to a sauna where he breaks in and finds a human brain. The police arrest him, however Peyton gets him out of jail. Upon seeing that he is looking at pictures of brains, his girlfriend dumps him. Next he buys a gun and goes to the gym to see if he can have brains. The candyman soon hears his desires. 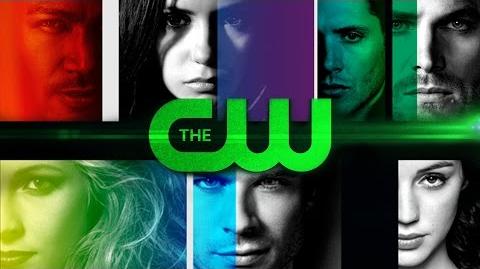 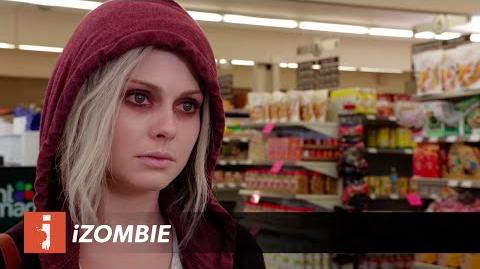 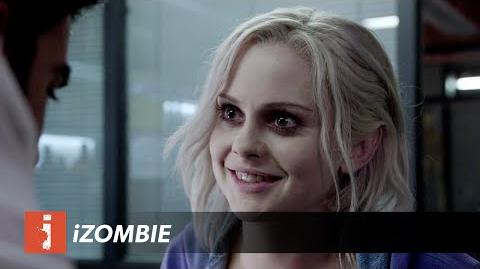 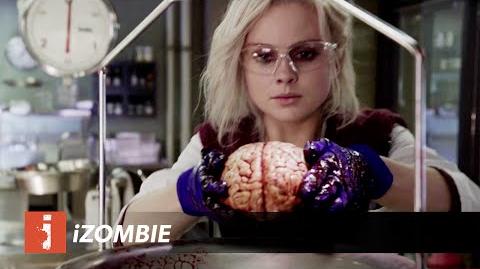 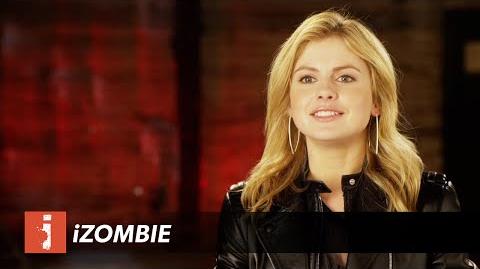 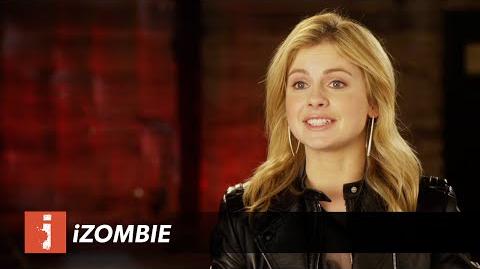 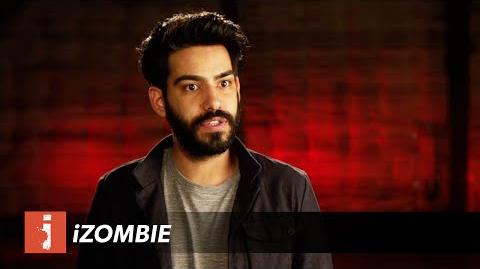 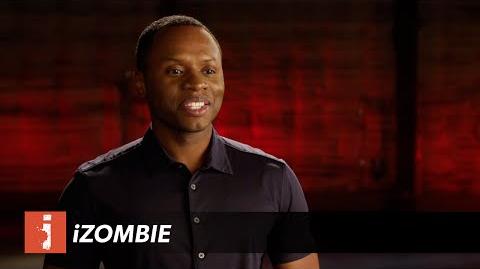 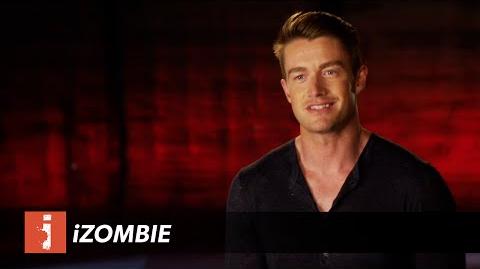 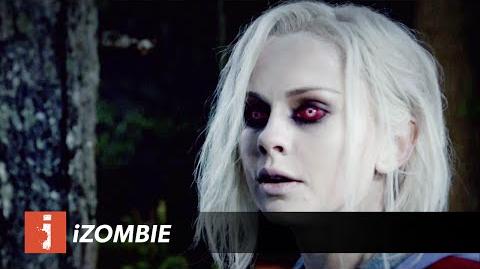 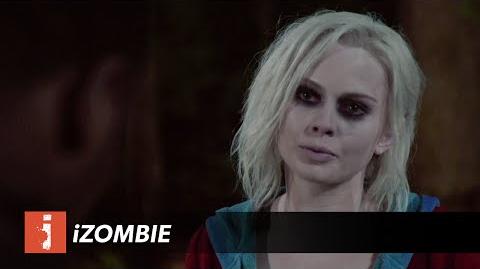 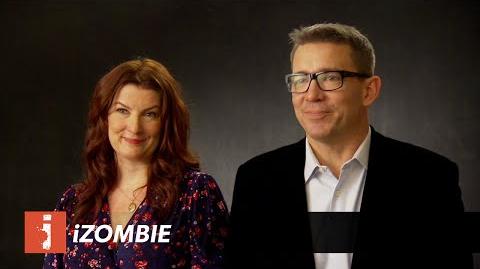 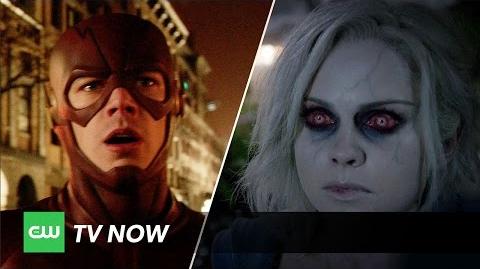 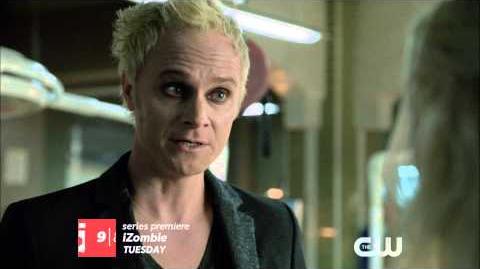 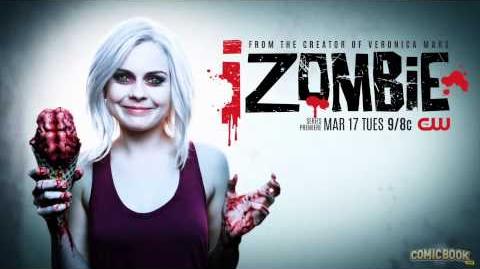 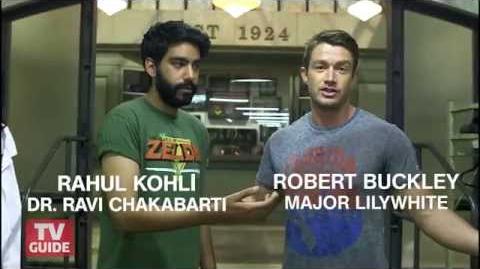 On the Set of iZombie The stars give us a tour! 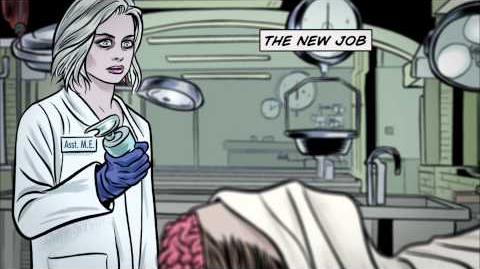 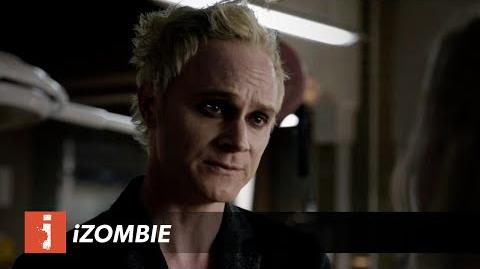 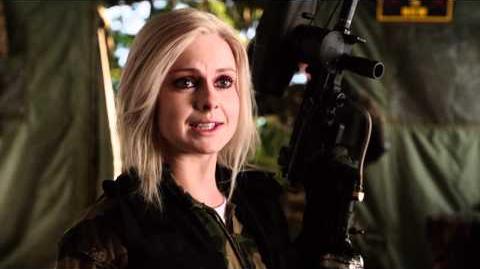 Retrieved from "https://izombie.fandom.com/wiki/Season_1?oldid=17476"
Community content is available under CC-BY-SA unless otherwise noted.