Are You Ready for Some Zombies?

And He Shall Be a Good Man
iZombie was renewed for a fourth season by The CW on May 10, 2017.[3] It premiered on February 26, 2018, a Monday. This is a first for the series which has aired on Tuesdays since its premiere.

Liv (Rose McIver) became the underground leader known as "Renegade", smuggling sick humans into "New Seattle" and zombifying them, putting her in direct crossfire with Fillmore-Graves–whose main role is zombie-population control given the brain shortage. Putting on her the opposite side of Major who is the Commander of his Unit at Fillmore Graves. Blaine's (David Anders) father Angus (Robert Knepper), aka "Brother Love", develops a zombie cult following set on trying to spread the virus beyond "New Seattle" walls. Meanwhile Ravi (Rahul Kohli) creates a cure using a young, terminally ill girl who's immune to the virus. Amidst all the chaos, Clive (Malcolm Goodwin) and Dale (Jessica Harmon) struggle to make their human/zombie relationship work. 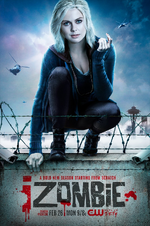