As Liv and Detective Babineaux investigate a hit and run case, they discover the victim was a sociopathic hit man responsible for the murder of a tech entrepreneur, a case that Peyton is prosecuting. Liv and Ravi dig deeper into a supposed zombie sighting that was posted on line which leads Liv to make a surprising discovery about someone from her past. Major moves on with his life and Peyton is shocked by Liv's reaction.[1]

The episode opens on two teenagers discovering a zombie. At the morgue, Ravi says that a zombie sighting has been posted online. Liv agrees to go with him to investigate the location where the zombie was found. Ravi and Liv are investigating a hit and run victim, and Ravi notes that the corpse, Marvin Webster's brain should be safe to eat, since he seems to be "just your average family man".

Blaine arrives at the morgue, and confronts Liv about not showing up for a brain exchange. Liv tells him that she's done working with him, and that she'll never be able to trust him. At home, Peyton asks Liv to help her practice for her cross examination as she's prosecuting a homeless man accused of murdering a wealthy tech company executive named Wally Walker. Suddenly, Liv gets a vision, and it turns out that Marvin killed Wally.

Liv heads to the police department and she fills Clive in on how Wally died. She learns that another man is being accused of the murder, and when Clive laughs at her, Liv asks him if he'd rather send an innocent man to jail than "rock the boat."

It's revealed that the brain that Liv ate doesn't make her feel or react to anything. When Peyton shows her a video of Major kissing another woman, she doesn't feel anything at all, and that disturbs her. At the lake where the zombie was seen, Liv and Ravi look down a pit and see Marcy Khan, Liv's co-worker that invited Liv to the party. Marcy is entirely far gone, but Ravi thinks that he can fix her by feeding her brains.

Liv goes to see Clive again to ask him to help her investigate the Wally Walker case, afters she has discovered that Wally had some serious gambling debts. He is hesitant to help her because he is not assigned to the Wally Walker case. She asks him to help her "lean on his bookie." The bookie happens to be Frank Smith, "former Seattle cop, current owner of Smitty's Bar & Grill, and bookmaker to half the cops in the city." They head to the bar where they walk into the weekly trivia night contest, which Liv joins and wins. Liv then gets her picture taken by the host, who is dressed as Jeannie from I Dream Of Jeannie. They talk to Frank Smith and ask him questions about Wally Walker's debts. Frank informs them that the last time he saw Wally was the day he died. Wally had come in to the bar to ask Frank for more time paying back his debts. On their way out Liv sees a picture on the wall of Marvin Webster. His picture, which is titled "The Exterminator," was taken because he won the last trivia night contest, which also happens to the same night Wally Walker died. This places both of them at the same place on the same night.

Liv and Clive head to Marvin's place of residence and ask Mrs. Webster to allow them to look through her husband's personal effects. She is more than happy to oblige. While down in the basement, which is stacked with several books on facts and trivia, Liv has a vision. She sees Marvin Webster get hit by a car, and then sees it back up and run him over. This changes the theory of Marvin Webster's death from hit-and-run to murder. Liv also happens to get the car color and a partial plate number. Meanwhile Clive finds the gun that killed Wally in Marvin's toolbox, a glock with a suppressor.

Liv is at home looking at pictures of cars in order to match the one in her vision. With only a partial plate number and color there is a large list of cars that could have hit Marvin. Clive, while at the police department, tells Liv to draw a sketch of the tail lights to help narrow down the list. Peyton walks in, early from work, because they released her prime suspect in the Wally Walker case in light of finding the murder weapon in Marvin Webster's basement. Peyton and Liv get into an argument because Liv looked through Peyton's confidential files. These files were the ones that mentioned Wally Walker had a gambling problem. Peyton becomes annoyed because Liv has been apathetic with her own affairs for the last couple of month, and only now she is showing initiative. She becomes even more upset because she feels that Liv has derailed her career by dismantling her case and is currently unfazed by it.

While at work Liv confesses to Ravi that she was unable to apologize to Peyton. She is also upset that she hasn't been able to feel emotions and is tempted to eat a different brain. Ravi convinces her to stay on her current brain in order to solve the murder. While discussing their plans for Marcy, Major walks in with Jerome. Major and Jerome have been trying to talk to the cops about Jerome's roommate who has gone missing four days ago.

Liv talks to Clive and explains that Major works as a counselor at Helton, a halfway house for teen runaways, addicts, and delinquents. She tells Clive that Jerome's roommate, Eddie, went to the skate park a few days ago and has not returned. Major states that they have already filed a missing person report but there has been no followup. Major and Jerome both insist to Clive that Eddie didn't run away because he was doing really well, and that his iPod is still in it's dock, respectively. Jerome tells Clive that Eddie is a skater and use to hang out at Nine Trolls, a skate park near Helton. He also tells Clive that Eddie has been going there less recently due to the fact that a "scary dude" has been hanging out at the park. This "scary dude" goes by the name Candyman and is passing out Utopium to anyone that follows him. Clive tells them that he is going to pass the report on to Missing Persons and get it to the top of the pile. At this time Clive also compliments Jerome on his distinctive sneakers, one red and the other blue in the style of the USA flag.

Clive tells Live that he has found a matching car, a 1978 Landau, thanks to her drawing. The car was sold to Wally's business partner, Don Watts, one day before the murder. Clive thinks that Don hired Marvin to kill Wally, then as a precaution, Don killed Marvin in the hit and run.

They bring in Don for questioning and Clive proceeds to state his theory. The cocky Don tells them that there is no proof that he even knew Marvin. He also stated that even if he did run over Marvin, who is now suspected of killing Wally, he was basically doing a favor for society and that he wouldn't receive any jail time for it.

Clive and Liv go to Marvin's home and impound his car. Mrs. Webster is very upset, now that they have incriminated her husband as a murderer. They use the GPS to find recent destinations and the go to Marvin's last location, a park. At the park an ice cream truck causes Liv to have a vision of a meeting between Don and Marvin. She also sees a garbage man that witnessed the meeting between the two men.

Later, Liv and Ravi check on Marcy— she's not getting better. Liv suggests killing her, while Ravi is determined to save her. While Ravi is trying to sedate Marcy he falls into the pit. Liv watches for a bit, unaffected, before jumping into the pit to rescue Ravi. She goes full zombie and kills Marcy.

Clive and Liv meet with Don. Clive tells him his theory and also tells him that there is a witness. The garbage man, partially seen outside the interrogation room, was able to pick both Don and Marvin out of a lineup and was also able to provide details of their meeting. Peyton arrives to offer a plea deal. Don accepts and signs the confession. The "garbage man" seen from the interrogation room turns out to be Ravi in costume. His face had been obscured due to the blinds.

Later, Liv thinks about eating more of Marvin's brain so she won't have to feel anything, but she changes her mind and throws it away. She also goes to Marcy's house and leaves the necklace that Marcy was wearing the night of the party.

While at home, Liv is watching the video of Major and another girl kissing. No longer on Marvin's brains, she is able to feel emotions and this video greatly upsets her. Peyton walks in to comfort her.

The show ends with Jerome going to the skate park handing out flyers of Eddie. He asks a few people for help and one of them turns out to be Blaine. Blaine tells him that he just saw Eddie and that he is now at a house party nearby. Blaine offers to show him where and Jerome follows him.

WHAT COULD POSSIBLY GO WRONG? 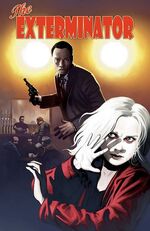 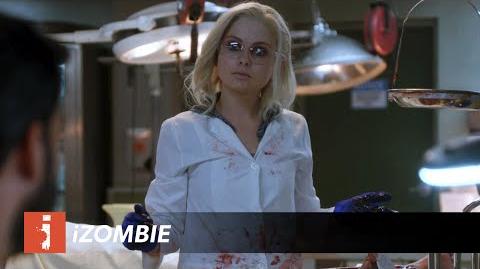 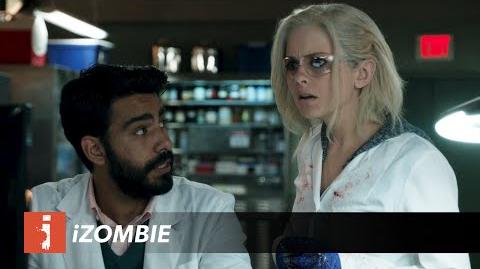 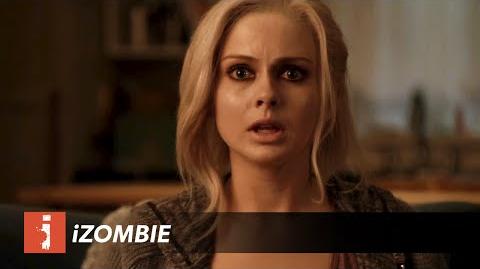 IZombie - Inside The Exterminator